Tansley Primary became a Fairtrade school in summer 2017 and then won the Fairtrade Football competition in the following September.

They are celebrating Fairtrade Fortnight 2018 by having two Fairtrade baking days, a coffee morning for parents and the Fairtrade Committee are having a go at writing a Fairtrade Rap to be performed in school (and perhaps even further afield)

St. Giles Y6 pupils are baking and taking part in an assembly for Fairtrade Fortnight.

A new Fairtrade Steering Committee was set up in November 2015 with new members joining some of the existing committee to replace those who have moved on to secondary school. We discussed plans for the Christmas Faire and we had loads of fun ideas on how to raise awareness of Fairtrade.  We plan to do a big breakfast during Fairtrade Fortnight. Yum!

At the end of the track each team member had to take off their suit and pass it to the next member of the team. Just as the race was about to start  – down came the rain from the very black cloud that had been threatening all of the sunny afternoon. The show must go on – so the race was run in the pouring rain with the teams having to exchange their banana suits while they were soaking wet. Not an easy task!

The relay race was run again the next day in beautiful sunshine and the same team won both times. The secret of their success was cooperation. As the members changed suits they helped each other take it off and put it on the next runner. What a good lesson to learn in life – You can achieve more with cooperation.

To watch a video about Fairtrade Footballs http://www.balasport.co.uk/our-partners/schools/

Most of the local primary schools took part in baking activities during Fairtrade Fortnight 2014.  These included:

Lessons and assemblies were done as part of the fortnight too.

Teams of boys and girls compete against each other refereed by sports ambassadors from the secondary school. As well as the winners award there is a Fairplay award. Each team and referee takes a Fairtrade Football back to school with them.

Sainsburys displayed the Fairtrade recipes designed by school children in Darley Dale in the Matlock store. 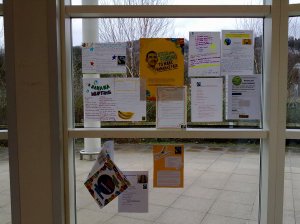